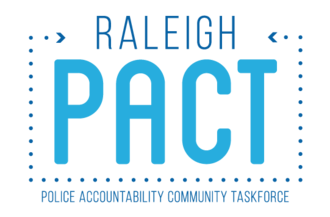 THE RALEIGH POLICE ACCOUNTABILITY COMMUNITY TASK FORCE (PACT)
is a coalition of community-based groups, community leaders, and non-profit organizations committed to human rights. We came together in April 2015 because we knew either from personal experience or were seeing in our backyard the need for local policies that create accountability to community, equity, and transparency in Raleigh policing. We're working together to end racial profiling, selective enforcement, excessive force and harassment by police.