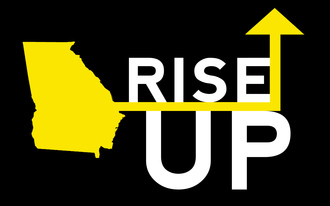 Rise Up's mission is to build the power of working class communities throughout the state of Georgia, to advance racial and economic justice, by taking bold action on the streets and at the ballot box.

We value organizing that empowers community members to take direct action to address issues they care about. We believe that large numbers of people united around a common concern is a vehicle of power that is able to provide a formidable counterweight to corporate control over the political process.

We work to empower the new majority— which includes people of color, women, the LGBTQ community, working people, immigrants, and young people— to make change at all levels of government, in order to create a more inclusive and participatory democracy.  Rise Up members express their power through direct action and civic engagement, in order to demand political, economic, and social equality, regardless of race, class, gender, sexuality, ability, or citizenship status.