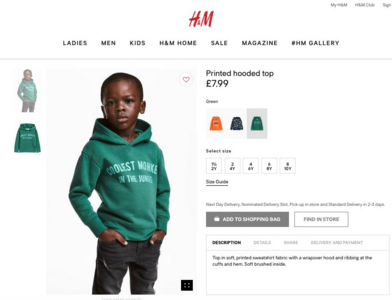 Apologize for running this ad, fire the folks responsible, and hire Black executives!

Yesterday, a user on noticed that H&M UK was using a Black boy to model a hoodie reading “Coolest Monkey in the Jungle.” H&M selling a hoodie that says "Coolest Monkey in the Jungle" is insult enough. They went on to ensure their message was clear when they put the hoodie on a little Black boy in order to advertise it. There is no excuse for H&M to continue to trade in that imagery in our current times, there’s a long history of Black people being compared to monkey in order to dehumanize us. H&M must show a commitment to diversity and hire Black executives to stop propagating racism.

Join us if you believe that H&M must hire Black executives.

This is a failure on every level. The stylist, photographer, marketing manager, site administrator all failed to stop and think of the implications of dressing a little Black boy in an outfit calling him a monkey. Or they thought of the implications and moved forward anyway. Hoping to capitalize off of the controversy they knew this would engender. This is a result of a fashion industry steeped in racism and lacking Black voices. This knowing exploitation of racism only reifies stereotypes and bigotries that have dominated our society. We cannot divorce the image of a Black kid as a "monkey" from the image of a Black kid being so different from white people that they're seen as an inherent threat. We've seen Adidas attempt to release shoes with ankle shackles, referencing the painful history of slavery and the dehumanization we were subjected to as a result. We've seen fashion magazines like Vogue use Blackface to be "edgy" and controversial. Each of these decisions serve to further entrench the image of Black people as an "other." This image of the Black person as an "other" is seen in the makeup of the fashion industry so severely lacking empowered Black voices to prevent the continued dehumanization of Black people.

Dressing a Black kid in a shirt calling him a monkey isn't "hip" or "ironic." We cannot allow "rebranded" racism to flourish. The racism of the fashion industry is reflected in the lack of Black designers, brands, and models. Clearly, H&M needs Black executives who are empowered to prevent this from reoccurring. They need to hire Black executives now.