Stop the violence against Colombian protestors. 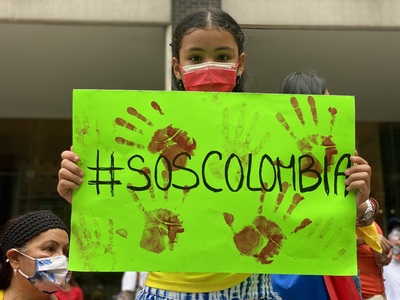 As the entire world watches with horror as Colombians participating in their democracy are met with state violence and police abuse, this letter is an urgent call to action for both the Colombian government as well as the United States government which for decades has funded the militarization of Colombian police forces.

We call on the Colombian government to:

Immediately cease repressing its citizens’ right to protest and hold the ESMAD and National Police accountable for the human rights abuses that have been committed against protestors.
Engage in meaningful dialogue with civil society of those communities whose voices have been silenced, ignored, and unmet, including the organizers of the national protests, and commit to addressing structural and systemic reforms including much-needed police reforms.

We call on the U.S. government to:

Speak out publicly in support of Colombians' right to peacefully protest and urge the Colombian government to follow through on dialogues with civil society representatives of the most marginalized communities so together they can develop a plan that results in structural reforms including police reforms.
Withhold any US funds under the Leahy Law to ensure our US taxpayer money is not being used to support the ESMAD and other law enforcement units engaging in human rights abuses.

We, the undersigned progressive leaders in the U.S., stand in solidarity with the people of Colombia as they risk everything to exercise their international human rights of Freedom of Expression and Freedom of Assembly through massive peaceful protests which began on April 28, 2021. We have witnessed vibrant, creative, and peaceful mobilizations turned into crime scenes. We are outraged as we bear witness to the Colombian National Police engaging in repressive tactics against peaceful protestors when their duty is to keep all residents safe. The Colombian government, especially the Anti-Riot Mobile Squads (Escuadrón Móvil Antidisturbios known as ESMAD), have instead used excessive and disproportionate force against protestors.

These mass mobilizations were triggered by, and are a direct response to, President Duque’s failed leadership in addressing the pandemic, and specifically sparked by his recent proposed tax increases on public services, wages, fuel, and other programs that would disproportionately impact the working and middle classes.

As social justice leaders who are speaking out against the unjust impacts of the COVID-19 pandemic, the economic crisis and police violence against Black and Brown communities in the U.S., we cannot remain silent as state violence grips Colombia. The human rights organization – Temblores which has been
tracking police violence in Colombia since 2017 – has documented 3,155 cases of violence by Colombian
law enforcement agents between April 28, 2021 when the protests began and May 26, including 43
murders, 855 injured, and 21 victims of sexual violence, in addition to 1264 protestors arbitrarily
detained.

The Biden Administration has an opportunity to share its vision and strategy behind the American Rescue Plan which represents a historic economic investment in the most marginalized members of our society, including workers and communities of color, and seeks to address economic and racial inequities in the U.S. This can and should be a model for Colombia and other countries in the Western Hemisphere.

It is the responsibility of governments – like the United States and Colombia – to invest in all of their residents’ Freedom to Thrive and Freedom to Remain in their home country so they are not forced to migrate due to violence, and/or economic and racial inequalities. Governments living up to these responsibilities will benefit all of us living in the Western Hemisphere.

These protests are just the latest social expression of anger, frustration, and indignation of decades of violence; human rights abuses; economic, racial, and gendered inequality and discrimination that has had especially impacted Indigenous and Afro-descendant communities in Colombia.

We, the signatories to this letter, are social justice leaders in the U.S. If we were carrying out our life’s work in Colombia, our lives would be at risk given the long history of social leaders and human rights defenders being killed with impunity. The Institute of Studies for Development and Peace (Instituto de Estudios para el Desarrollo y La Paz o INDEPAZ) has documented 57 cases of social and human rights leaders murdered in 2021 so far.

The civil and human rights crisis in Colombia is complex and long-standing and this latest social expression is an international cry for the respect and dignity of all lives, and for racial, gender, and economic justice and equity.

To the Colombian people, we want you to know that we see you, we hear, and we love you! We commit to doing our part from here in holding the U.S. government accountable to support all Colombians’ civil and human rights.