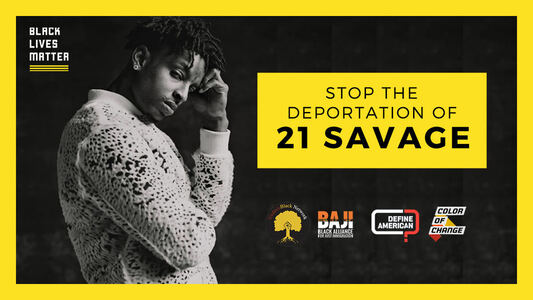 The hundreds of ICE assaults and detention of Black immigrants is an endemic in the United States, and is too often carried out with the assistance of local law enforcement. On February 3rd in the early afternoon, organizers were alerted to the arrest and detention of rapper, father, community activist and friend She’yaa Bin Abraham-Joseph -21 Savage. The circumstances of Mr. Abraham-Joseph's detention stand as a testament to the consistent and historically under-reported harassment and targeting of Black immigrants. The US' violent history of criminalizing Blackness intersects with its deadly legacy of detaining and deporting Black and Brown immigrants. This needs to stop today!

There are around 4.2 Million Black immigrants in the U.S. - 619,000 are undocumented. Mr. Abraham-Joseph has been in the United States since he was a young child. Atlanta is his home. He has no current or prior criminal convictions and he is beloved by his friends, fans and family. It is shameful that he and so many Black immigrants are separated from their families on a daily basis as part of the US's heartless and racist immigration policies.