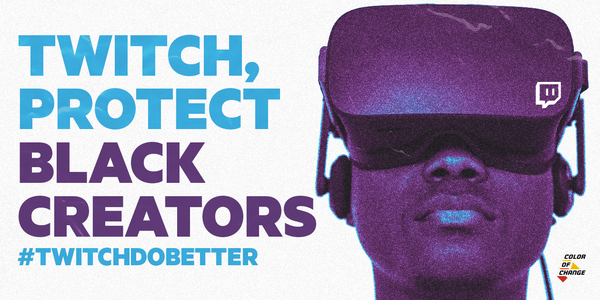 **Update (09.29.2021): Twitch has implemented email and phone verification, an additional account authentication tool. It has also granted creators and moderators the ability to require that those who participate in livestream chats be phone- and email-verified.

We Demand That Twitch:
(1) Implement a feature that allows Twitch users to log all types of harassment, regardless of whether the incident took place during the livestream event.
(2) Implement a feature that allows Twitch streamers to more easily add timestamps and issue tags to chat messages so that any complaints filed with Twitch contain appropriate data metrics.
(3) Implement a software program that detects and bans universal slurs and pejoratives, even those written in non-Latin characters or symbols.
(4) Permanently ban any users believed to have violated Twitch’s Terms of Service or Community Guidelines.
(5) Expand user permissions to provide Twitch users with greater authority over their accounts.
(6) Grant Twitch streamers permission to set age account requirements for those allowed to:
- Follow/send messages to the streamer.
- Follow/send messages to livestream’s moderators.
- Watch streamer’s livestream channel.
- Chat on streamer’s livestream channel.
(7) Grant Twitch channel owners and moderators permission to approve/decline raids.
(8) Immediate and timely assistance when a hate raid or threat occurs.
(9) Moderation support for “featured” creators to stop hate raids and threats in real time during promoted and special events.
(10) Make a public commitment to adopt the aforementioned changes.

On August 13, @KandidlyKayla (a Black woman) partnered with Twitch to host a “Stand Up To Cancer” charity livestream event and raise funds for cancer research initiatives. During the event, more than 400 follow bots raided the livestream and berated @KandidlyKayla with racist slurs, loaded pejoratives, and other hateful comments. This occurred twice within two hours, and Twitch did nothing to stop it. The channel moderator, Lu Murrow, had to remove all 400 follow bots one by one so that the event could proceed. And when @KandidlyKayla reached out to Twitch to discuss the “hate raids” and the repeated online harassment faced by Black creators, executives were hesitant to meet with her.

That same week, #TwitchDoBetter (created by fellow Twitch creator @RekItRaven) went viral on social media. Tens of Black creators recounted similar experiences with hate raids—some dating back to 2018—and pointed to Twitch’s continued failure to protect them from anti-Black racism, harassment, and abuse on the platform. Only after these stories went viral and were picked up by multiple media outlets did Twitch publicly acknowledge the hate raids and abuse that Black creators experience. While Twitch announced that it would update its anti-spam filters to better detect hate speech on live channels, Black creators explained that racist users often bypass those filters by using non-Latin characters (e.g., Cyrillic). While Twitch unveiled user protections, such as channel-level ban evasion detection and account verification improvements, these changes will not be implemented until later this year.

This is not enough. Black creators have endured harassment for over five consecutive years, and hate raids have increased substantially within the past two weeks alone. Black creators are being attacked, Black channel moderators are being forced to interact with and remove racist users, and Black children and teens are reading racist comments that belittle their identities.

As a multibillion-dollar streaming platform that generates its revenue from content produced by Black creators, Twitch has a responsibility to develop programs and policies with intentionality and thoughtful consideration given to the experiences of Black people. Black creators are the driving force behind the platform, and should feel safe while engaging with other users.

Sign the petition to demand that Twitch take meaningful steps to address anti-Black racism and hate on its platform. #TwitchDoBetter