To: African Americans and Allies

Campaign created by
Lynn A. 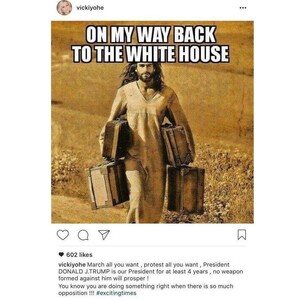 This petition is in response to Vicki Yohe's social media post on January 21, 2017 which suggests Past President Obama was anti-Christian and President Trump is pro-Christian. Her comments ignore the hateful and bigoted words and actions of the current president.

Many White Christian artists and ministers, who through the verbal acknowledgment of some, and the silence of others, are complicit in the current racist climate where Christian and non-Christian persons of color are being targeted and marginalized.

Yohe’s comments also turn a blind eye to the United States' history where the majority of White Christians supported the enslavement of African people as well as implemented laws supporting the violence and brutality of enslaved African persons.

These same White Christians would not worship with people of color as they believed in the inferiority of people of African descent.

These same White Christians supported Jim Crow laws and were staunchly for segregation.

These same White Christians executed and celebrated the lynchings of African persons after their church services.

As Professor Angela Davis says, “We are inhabited and shaped by our histories. These histories continue to assert themselves (From “Busboys and Poets” Live 1/22/17 taping).”

This history is relevant given we have a new federal administration that is actively seeking to reverse civil rights, encouraging unchecked policing, as well as projecting negative and dangerous stereotypes of the African-American community and other disenfranchised groups.

We will not accept lukewarm apologies; but, demand, not just public expressions reflective of anti-racist beliefs and a value for persons of color but also actions. An example of such actions could be to have proceeds of an entire concert go to an African-American organization which supports civil rights. Also, artists can publicize when they write their legislators and request policy that supports fair community policing, improved education, and equal hiring and pay for persons of color.

Yohe's sentiments represent the views of too many White Christian musical artists who have not taken an active and public anti-racist stance; yet, whose work is supported by many African-Americans. This petition is a call to boycott these White Christian artists and ministers:

• Do not purchase any of their merchandise and products

• Do not attend concerts

As people of African-descent and those who are allies, we must put our money where our value is. We will no longer be silently accommodating, and hence supporting, White supremacy cloaked as Christianity as long as oppressed communities remain disrespected, devalued, dehumanized, and destroyed "in the name of Jesus."