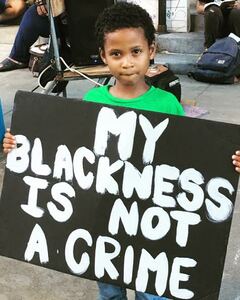 Hundreds of Black Lives Matter activists and allies have been sitting-in at Los Angeles City Hall since July 12, 2016, prompted by the ruling of the Los Angeles Police Commission that the killing of 30 year-old Black mother, Redel Jones, was “in policy.”

Redel Jones, who stood 4'10" tall, was accused of stealing $80 with a kitchen knife from a local pharmacy on August 12, 2015. By witness accounts, she was running away from police when she was spotted in an alley and shot as she fled; her body laid on the pavement for hours and her family was not notified of her death for more than a week. Redel was the mother of a 7 year-old girl and a 13 year-old boy; her husband, Marcus Vaughn, travelled to Los Angeles by bus to be present for the ruling. Her family is still reeling from her death and outraged by the ruling.

Sadly, Redel Jones is one in a long list of victims killed by the Los Angeles Police Department (LAPD). For the last three years, LAPD – under the “leadership” of police chief Charlie Beck – has killed more of its residents than any other law enforcement unit in the country, killing 21 in 2015 and 10 so far this year, many of whom were unarmed people of color and/or people with mental health challenges. With only one exception, the chief has refused to condemn the acts of officers who kill residents, fire/discipline them, or recommend them for criminal prosecution. Moreover, he has refused to release information to the families of victims, most recently with the in-custody death of Wakiesha Wilson, killed in an LAPD jail cell on Easter Sunday 2016. Beck is also on-record as referring to former LAPD chief Darryl Gates (who headed LAPD during the Rodney King era) as his mentor and role model. This is not who we want in charge of the police force.

For more than a year, Black Lives Matter and ally groups have been calling upon the mayor of Los Angeles, Eric Garcetti, to fire Chief Beck. Every moment that Beck remains in his post, brings grave danger for community residents.