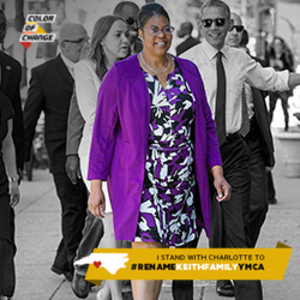 Take the Keith Family name -- who are notorious prison profiteers and conservative "pay-to-play" cronies -- OFF of the YMCA in Charlotte AND rename the YMCA in honor of Ramona Brant, a local Charlotte community leader who died this year after a life of advocating for the formerly incarcerated after being commuted from a wrongful life sentence in prison by former President Obama.

I need your help taking down the Keith Family name -- notorious prison profiteers and conservative “pay-to-play” cronies--off of a Charlotte YMCA branch. I was at Mecklenburg County Jail North when I noticed the “Keith” logo on prison staff uniforms matched the “Keith” on the YMCA where I worked as a fitness instructor. Yup, that’s right. The Keith Family YMCA in Charlotte is named for prison profiteers. Help me rename the Keith Family YMCA to honor my friend Ramona Brant who died recently, who fought tirelessly for prisoners even after she was unjustly locked up for two decades.

The name of a powerful Black woman and prison abolitionist, Ramona Brant -- not the greedy prison-profiteering Keiths-- deserves to be uplifted in our community.

“We are not considering a name change at this branch”. That’s President & C.E.O. of YMCA-Charlotte, Todd Tibbits response to us yesterday when Color of Change and I reached out on renaming the Keith Family YMCA. Todd doesn’t get why naming a YMCA Charlotte branch after prison-profiteers like the Keith Family and taking donations built on blood prison money is bad for Black families.

Tell Todd: “The YMCA should not be uplifting people who built their wealth on Black pain and the devastation of prison industry on the Black community.”

The Keiths, since 1999, have aggressively pursued private maintenance contracts in North Carolina state prisons where Black people represent 22% of the population yet make up 55% of state prison population.1 As of 2016 in Mecklenburg County where The Keith Corporation is headquartered, Black people represented 31.2% of the county population2 yet make up 67% of the Mecklenburg County jail population.3 The Keith Family has also been embroiled in controversy for political cronyism that sparked a federal investigation.

The YMCA, a place where our children play, shouldn't stand for the devastation that the prison industry, and prison profit-buddies like the Keith Family. Sign now to tell YMCA Greater Charlotte to remove their affiliation with the grossly unjust prison industry.

Ramona Brant. Say Her Name. Ramona Brant -- not the Keiths -- is the embodiment of the YMCA’s stated mission of transformative social change and a commitment to families and communities. Ramona, after former President Obama commuted her sentence, only knew two years of freedom after surviving two decades behind bars. In 1995, federal prosecutors unjustly sentenced Ramona to a life sentence without parole for simply being in relationship with someone who dealt drugs.4 In the end, white supremacy and the prison industrial complex took a toll on her life. But, she spent those two years as a powerful voice for change in Charlotte-- fighting for housing, living wages, jobs, and inclusion for those like her reentering society after incarceration.

Black women, like Ramona Brant, are too often discarded and disrespected. It’s time we put some respeck on her name and give Ramona the love and honor she deserved when she lived.

Too often the experiences of Black women being targeted and swept up by the prison industrial complex--fueled by the profit-greed of people like the Keiths--are erased. Ramona Brant’s name on a community institution that serves Black families in Charlotte does justice to her legacy and is a powerful reminder of the unwavering strength of Black women in opposing oppression. It’s time to take the Keith Family name down.

Remember Ramona Brant. In her name and until justice is real for all those who are wrongly incarcerated,