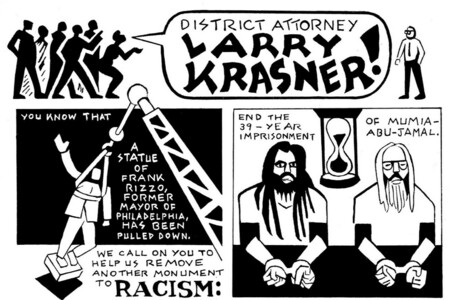 We, the signers of this petition declare:

Mumia Abu-Jamal is currently suffering from COVID-19, congestive heart disease, liver damage, and a worsening of a severe and debilitating chronic skin condition. The cirrhosis of the liver and increased likelihood of liver cancer resulted from his untreated Hepatitis C in spring 2014. His Hep C went untreated for nearly two years until attorneys secured a preliminary injunction that forced the Pennsylvania Department of Corrections to meet basic national treatment guidelines and give him the fast acting anti viral Hep C cure. In addition, Mumia was treated with topical steroids for his skin condition, which caused a diabetic reaction. Prison medical staff neglected to monitor and follow up on their own chart notations for three weeks! His unmonitored glucose levels resulted in a severely high glucose level resulting in ketoacidosis, requiring Mumia to be rushed to the ICU. Mumia Abu-Jamal now relies upon that very same prison healthcare system, the prison infirmary, for treatment during his current health crisis. Our collective call for Abu-Jamal’s release could not be more urgent. As Abu-Jamal’s physician Dr. Ricardo Alvarez says: The Only Treatment is Freedom.

Even without the current health emergency, Mumia Abu-Jamal’s 1982 conviction was already a travesty of justice, obtained through a combination of police, prosecutorial, and judicial misconduct, as documented by Amnesty International. Abu-Jamal has suffered from extreme injustice at all levels of the criminal justice system. These numerous improprieties have tainted Abu-Jamal’s conviction beyond repair.

Mumia Abu-Jamal is currently represented by Sam Spital of the NAACP Legal Defense Fund and Judith Ritter on his criminal case. His medical legal team is led by Bret Grote of the Abolitionist Law Center and Robert Boyle. We the petitioners are not his lawyers and do not speak for them. Instead, we are the grassroots movement of people united by the fact that we care about the fate of Mumia Abu-Jamal.

We are outraged by the many different ways that racism and institutionalized white supremacy have irreparably harmed Mumia Abu-Jamal’s civil and human rights, and his rights to the fair adjudication of his case. Abu-Jamal’s continued imprisonment only affirms the longstanding racial injustice that has marred this case.

DA Krasner, you have the authority to secure the release of Mumia Abu-Jamal. You have secured release of over a dozen persons whose unjust convictions were based on evidence of innocence deliberately ignored through improprieties by police and prosecutors. Abu-Jamal deserves the same level of fairness. If law has plain letter meaning, then please adhere to the 1889 directive from the Supreme Court of Pennsylvania that the District Attorney’s Office “…seeks justice only…” Also remember that same Court’s 1959 reminder that regardless of a DA’s belief in guilt, all defendants are “…entitled to all safeguards of a fair trial as announced in the Constitution…”

Therefore, we respectfully urge you, in the strongest possible terms, to stop defending Mumia Abu-Jamal’s conviction. Please secure the release of Mumia Abu-Jamal as soon as you possibly can.

WATCH THE VIDEO OF THE 2010 BALLISTICS CITED BELOW:

--The Evidence of Police, Prosecutorial, and Judicial Misconduct:

The racism throughout Abu-Jamal’s case is stark and unmistakable. Please remember that Albert Sabo, the 1982 trial judge, declared his intent to help prosecutors “fry the ni**er,” according to a 2001 affidavit by a court stenographer Terri Maurer Carter. This testimony was rejected by the Court, which ruled that it did not prove that the trial was biased. This and other egregious examples of overt racism thus form a key reason why he has attracted such wide-ranging support. This support includes the most prominent Black intellectuals of our generation, including Nobel Prize winner Toni Morrison, Alice Walker, Angela Davis, Cornel West, Henry Louis Gates, Jr, Michael Eric Dyson, and Marc Lamont Hill. In November 2020, the blacklisted football player and anti-racist activist Colin Kaepernick declared his support for Abu-Jamal. Outside the US, support for Mumia has come from such luminaries as Nelson Mandela and Bishop Desmond Tutu, as well as the European Parliament, Japanese Diet and the thousands in the countries of France and Germany. The widely-respected human rights organization Amnesty International determined in its 2000 investigation that “numerous aspects of this case clearly failed to meet minimum international standards safeguarding the fairness of legal proceedings.”

One example of the injustice is the lack of the application of the US Supreme Court’s precedent, “Batson issue” regarding racial discrimination in the jury selection process. Even before your office’s discovery of suppressed evidence found in six previously undisclosed file boxes, we already knew that the trial prosecutor, Assistant DA Joseph McGill used 10-11 of his 15 peremptory challenges to strike otherwise qualified black potential jurors. In his 2008 dissenting opinion, federal Third Circuit Judge Thomas Ambro argued that this one statistic alone was sufficient evidence for granting Abu-Jamal a Batson hearing. Therefore, he argued that the Third Circuit Court’s 2-1 ruling against Abu-Jamal’s Batson claim was unfair, and he wrote that the ruling went “against the grain of our prior actions…I see no reason why we should not afford Abu-Jamal the courtesy of our precedents.”

When, in 2009, the US Supreme Court then ruled against considering Mumia Abu-Jamal’s appeal of the 2008 Third Circuit Court ruling, it effectively ended Abu-Jamal’s Batson claim. However, upon inspecting the contents of the six file boxes that you handed over to the defense as the law required, Abu-Jamal’s defense team found major pieces of evidence. The first, a handwritten letter to assistant district attorney Joe McGill penned by Robert Chobert, a key prosecution's witness. In the letter, Mr. Chobert asks for his money—which suggests Mr. Chobert's testimony against Mumia may have been bribed. The boxes also reveal other handwritten notes on original files, closely tracking the race of jurors. These notes are new evidence of potential racial discrimination in Joseph McGill’s selection of the 1982 trial jury. This makes the case even stronger, and as a result, the Batson issue may well provide a basis for a new trial. Furthermore, the simple fact that the prior District Attorneys all suppressed these documents calls into question the DA’s practices and the fairness of the prior prosecution.

Entire books have meticulously detailed the injustice throughout Mumia Abu-Jamal’s case, such as those by authors Dave Lindorff (Killing Time, 2003), Michael Schiffmann (Race Against Death, 2006), and J. Patrick O’Connor (The Framing of Mumia Abu-Jamal, 2008). Veteran journalist Linn Washington, Jr. has been writing newspaper columns and articles about the Abu-Jamal case since it began on December 9, 1981 with the shooting death of Philadelphia Police Officer Daniel Faulkner and the near-fatal shooting of Abu-Jamal. Hence, the evidence of Abu-Jamal’s unfair trial is abundant and quite accessible to anyone who reads the work by any of these four writers.

In 2010, investigative journalists Dave Lindorff and Linn Washington performed a test to see whether bullets fired into the sidewalk at close range would leave visible markings. The test was designed to replicate the shooting scenario presented at Mumia Abu-Jamal’s 1982 trial by ADA Joseph McGill, alleging that Abu-Jamal stood directly over Officer Faulkner and fired downwards at him, execution style. According to McGill’s theory, Abu-Jamal missed several times because Faulkner actively dodged the shots by rolling side-to-side, until the final shot entered Faulkner’s forehead and killed him.

Lindorff and Washington sought to test a central argument of German author Michael Schiffmann’s 2006 book Race Against Death, written as his PhD dissertation at the University of Heidelberg. Dr. Schiffmann examined the crime scene photos, including those taken by freelance photographer Pedro Polakoff, and concluded that there were no visible divots or markings in the pavement...