Congressman John Lewis— longtime ally to Dr. Martin Luther King, Jr.— announced that he will not be attending Donald Trump's inauguration. Like many who watched Donald Trump fear-monger throughout his campaign, Lewis asserted "I don't see this President-elect as a legitimate president." And for the first time in 30 years, Lewis plans to boycott a presidential inauguration, adding he "cannot be at home with something that [he feels] is wrong."

Find your local campaign
Your Location 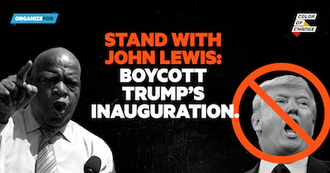