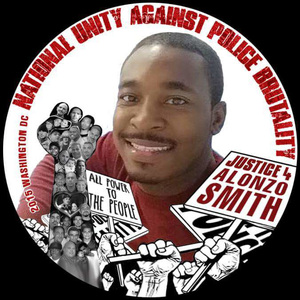 My son Alonzo (Z0) Fiero Smith, a 27-year-old unarmed black man, a father of 3, a substitute teacher for Acotink Academy School, in the state of Virginia, a poet and portrait model died in the custody of two Special Police Officers (SPO's} employed by Blackout, Investigations and Securities, inc. and licensed by MPD, at the Mulberry Plaza Apartment Complex, in Washington, D.C.. on November 1, 2015. Alonzo did not commit a crime and was unarmed seen and heard by residents of the apartment complex running and yelling in distress saying "help, help they are trying to kill me!!!" Alonzo's death has ruled a homicide (chokehold and knee in back while handcuffed and feet cuffed. His case was later presented to the Grand Jury which rendered a non-indicted for the two SPO's responsible for his death (SPO's Alonzo Wilson and Vega). They were never charged for his death and walked free fro his murder. Seven months after Alonzo's death and nine months after the chokehold death of a 74-year-old senior citizen man, at the Medstar Washington Hospital Center by an SPO, and numerous complaints of harassment and excessive use of force by D.C. SPO's and Security Guards (SG's) before and after the two murders, D.C. Mayor Muriel Bowser, on June 9. 2016, made a public announcement on proposed new regulations for SPO's and SG's. To date, it's been four years and the "Proposed Regulations" have not been implemented. This petition is calling for the implementation of the Proposed Regulations for SPO's and SG's in the District of Columbia, but more importantly, on a larger scope, to "Disarm and Reform Special Police in D.C." It is paramount for the safety and well being of all D.C. residents. I suffer daily, along with Alonzo's three children, family, friends and former students from his traumatic death and from the failure of our bias and racist judicial system, in favor of law enforcement, that allows them to commit murder with impunity and no accountability. Two deaths unlawfully taken by the hands of Special Police Officers are two too many.