To: Community, NFL Players/Players Assoc. for endorsement of demands to Owners, Franchises, and League Offices 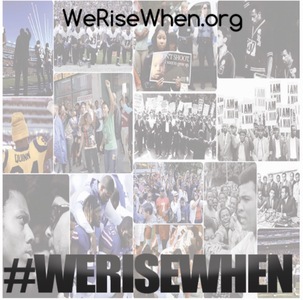 Who we are: #WeRiseWhen is a working group of lawyers, activists, students, professors, citizens, veterans and concerned community members from across the country who have been actively engaged in addressing social justice issues including police accountability and transparency. Collectively, we have a diverse set of experiences in the social justice movement including but not limited to representing and counseling families who have lost loved ones during police encounters, organizing town hall meetings and workshops, drafting public policy and legislation, filing civil rights lawsuits, and marching for justice. We truly have been encouraged by the increased engagement by NFL players who are kneeling in the spirit of social justice nonviolent protest, activism, and advocacy to raise awareness about the killing of African Americans by law enforcement.

What we are fighting for:Below is the initial list of the demands for local police departments:

1. All officers are required to wear body cameras that cannot be turned off with the stipulation that disabling cameras without cause is a terminable offense;

2. All cities and counties have citizen review boards with subpoena and disciplinary or sanctioning power and independent police auditors who report to the city council or county commission and have independent authority to take complaints, subpoena and make recommendations;

3. All departments adopt a policy that any officer-involved shooting will be investigated by an outside agency and footage will be released to the public within 30 business days;

*Most of these demands can be found in some form in the Final Report of President Obama's Task Force for 21st Century Policing.

Why you should sign: In an effort to contribute to the momentum started by Colin Kaepernick and bravely expanded upon by more and more NFL Players and to combat the recent attempt to hijack the narrative by President Trump from police brutality to patriotism, we are setting forth a call to action to the community to rally our voices by SIGNING & SHARING THIS PETITION and connecting our collective protests and frustrations to a list of demands.

It is our hope that fighting to reach 200,000 signatures on this petition we can show the wide array of support from throughout the community and country to support the protesting of NFL players to,

2. Aid in obtaining these initial but necessary police reforms in NFL cities across the country

3. Create a central point of support for those who have put their livelihood on the line to raise awareness and facilitate change