Join us as we call on both public and private actors within the criminal legal system to take the appropriate steps to prevent and contain the spread of COVID-19 within state prisons, local jails, and detention centers and in the communities in which they are located across the country.

These lawmakers and decision-makers have the power to ensure that a timely and humane response can alleviate the impact of COVID-19 on incarcerated people. 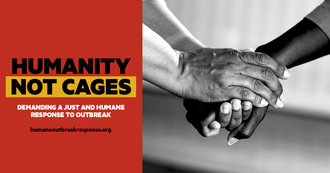