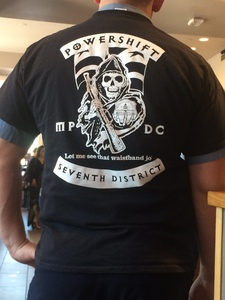 By signing this petition, I voice my outrage at this offensive shirt and demand the following:

- That MPD terminate Officer Vincent Altiere and any other officers who create, wear, and/or propagate messages of hate and violence;

- That any MPD Officer who failed to report the wearing of this shirt be severely disciplined;

- That the Metropolitan Police Department and the Office of Police Complaints conduct a thorough investigation into all manifestations of racism and abuse of power by MPD Officers.

On June 2, 5, and 13, 2017, Officer Vincent Altiere, Badge #4440, of the Washington, DC Metropolitan Police Department, was seen in the DC community and at the DC Superior Court (where he was present to testify in a criminal case), wearing an offensive, racist, and threatening shirt. The shirt displays symbols of police harassment, hate, and death while prominently displaying the symbols and emblems of the Metropolitan Police Department. We're asking that you join us, together we can voice our extreme concern about this offensive shirt and demand that Mayor Bowser's administration, Metropolitan Police Department and the Office of Police Complaints take immediate disciplinary action against Officer Altiere and any other Officers who have worn this or similar shirts. Our effort is already having an effect, the Metropolitan Police Department has already stated that they're taking Officer Altiere off the street for the time being. We are also demanding that officials take proactive measures to address a department culture that allowed this type of misconduct to go unchecked.

The shirt displays a “sun cross,” replacing the letter “O” of “PowerShift” with a notorious white supremacist symbol adopted by the Ku Klux Klan and other white supremacist hate groups. Immediately below is the image of the Grim Reaper, a personification of death in the form of a hooded skeleton, holding an assault rifle and a Metropolitan Police Department badge. Below, the shirt reads “Let me see that waistband jo,” referring to “jump outs” and the routine practice of demanding to see the waistbands of individuals, who are disproportionately young Black and Brown men, often for no legitimate reason.

Given the prominent placement of MPD logos and a badge number, the shirt does not appear to be attributed to Officer Altiere alone, but instead, appears to have been designed for a group of officers associated with the MPD Seventh District. Ninety-five percent of the residents in MPD’s Seventh District are black and too many Seventh District residents have experienced harassment and abuse at the hands of the police. It is time for the leadership of this city to acknowledge and address the systemic violation of rights, and threat of violence to Black people here in Washington D.C.

White supremacy and insinuated threats of death should never be associated with or tolerated in police departments who are sworn to protect and serve. Such ideologies are dangerous and demonstrate a blatant disregard for Black and Brown life. They are at the root of rampant police abuse and result in the unconstitutional terrorizing of Black and Brown communities and the callous murder of Black and Brown men and women at the hands of the police, both in Washington, DC and across the country.

On behalf of a number of community organizations and community members, Law4BlackLives-DC has formally filed complaints with both the Internal Affairs Division of the Metropolitan Police Department and the Office of Police Complaints regarding this shirt and the message it propagates. The shirt stands alone as an affront to the community. It also embraces ongoing patterns of constitutional violations and constitutes a blatant disregard of MPD’s own general orders, including MPD General Orders 110.11, 201.26, 304.10, and 304.15. We are also asking concerned community members to let Mayor Bowser know that she must step in to check this culture for the people of Washington D.C.

Such Officers are a threat to public safety and erode public trust in the police. Inaction by the Metropolitan Police Department, Office of Police Complaints, and the Mayor's office would be an endorsement of this shirt’s hateful message and an acceptance of a policing culture infected by racism and violence. We're going to keep pushing until we win substantive change, we won't rest until he is fired and everyone who has taken part in this disgraceful conduct is gone.

The detailed Complaint, including additional photos, can be found here: http://www.law4blacklivesdc.com/blog/2017/7/27/l4bl-dc-files-complaint-alleging-that-mpd-officers-have-been-photographed-wearing-white-supremacist-paraphernalia"