Take Em All Down!

Take Em All Down! 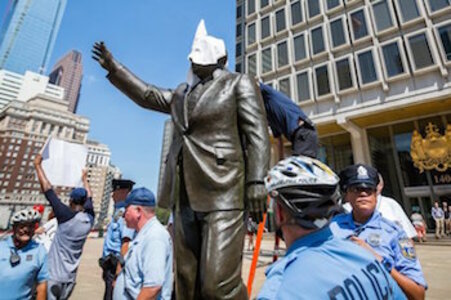 Frank Rizzo was a Philadelphia police commissioner, from April 10, 1967- February 2, 1971. He was also the 119th Mayor of Philadelphia, from January 3, 1972 - January 7, 1980. Rizzo was an unrepentant racist who stopped at nothing to torture and hold Philadelphia's African-American community as his personal hostages. Rizzo used his authority to stop resistance against racist and unconstitutional injustices by using attack dogs on African-American college students as they protested on Temple University's campus. He consolidated his powers of abuse as a former officer and then police Commissioner in the City of Philadelphia, while his brother, James Rizzo, was the city's Fire Departments Chief. The police and fire departments were highly segregated, and allowed racism to take fold and shape. While claiming to implement Affirmative Action as a way to end racial discrimination, these institutions were used to promote anti-black violence against the African American community. Rank and file officers were used to implement harsh punishments, brutal beatings, cover-ups, deception, internal crime, turf drops (the body-snatching and dumping of black "suspects" in racist white communities, which subjected them to violent attacks from that community) and racially profiled stop-and-frisks that continue to stain our communities in contemporary times.

Frank Rizzo's racist relationship towards Philadelphia's African-American community has always been one of violence, devastation and despair. Two of his most violent legacies to date involve members of Philadelphia's local chapter of the Black Panther Party being publicly stripped. The display of their naked bodies appeared on the Daily News' front page in August 1970, while the organization was preparing for a Peoples Revolution Convention to address police violence in the city and throughout the country.

The forceful eviction of the MOVE family from their home in 1978 is another one of Rizzo's racist legacies. The city waged a violent attack against the MOVE family, which led to the framing of the MOVE 9. As a result, Delbert Africa was brutally beaten. Images from the period show Delbert being dragged by his hair, being kicked and punched by the Philadelphia Police Department, as well as being struck with an officer's helmet. This incident of racist violence has left the MOVE 9 incarcerated for over thirty years, and not one local governmental official has been held accountable.

Frank Rizzo publicly made racist comments about Philadelphia's African-American communities; he openly used the term "niggers" when referencing black Philadelphians. Rizzo actively supported the historically racist views, values, and practices of Philadelphia's Police Department, which has left a lasting legacy of brutality and violence against the African American citizens of the city.

Frank Rizzo's abuse of the African-American community was supported by Richard Nixon, despite Rizzo being investigated by the Civil Rights Commission, regarding complaints involving police brutality. The removal of this statue would be the first step in acknowledging Rizzo's crimes against the African-American community. It would be a much needed step towards truth and reconciliation, and holding police accountable for misconduct. This is something that is long overdue in this city. The removal of the Rizzo statue would also remove the constant reminder that our city actively supported a racist demagogue and then immortalized him as someone worthy of honor.

The black community would rather see representations of the great contributions made by African Americans and other people of color to this city's development. These statues should be erected in place of the constant representations of Christopher Columbus, war heroes, Frank Rizzo and others who have held communities of color in subjugation. We will no longer allow our taxes and other city resources to be used to erect and maintain monuments of white supremacist figures.

For more information on how to volunteer, support, and media related inquiries contact, [email protected]