Sign Onto The People's Budget: Break The Cages, Fund The People 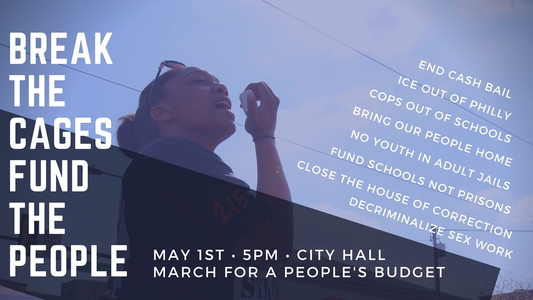 We want Philadelphia City Council to push for a city budget that invests in education and communities instead of incarceration.

- End our reliance on cash bail
- End the collaboration between ICE and our criminal justice system
- End the criminalization of youth through police presence in our schools
- Continue our trend of bring innocent people home
- End prosecuting and incarcerating youth as adults
- Invest in our public education system, divest from prisons and police
- Fully close and demolish the House of Correction facility
- Decriminalize sex work

On May 1st, at 5pm at City Hall, The Philadelphia Coalition for a Just District Attorney is gathering our movement under a call to end mass incarceration and reinvest in the communities most affected. For too long, “tough on crime” policies have deliberately targeted our black, brown, and working class communities -- ICE is tearing apart families, our youth are being criminalized in school and treated as adults by our overzealous criminal justice system, and the legal system's reliance on cash bail continues to overcrowd our prisons, keeping the House of Correction facility open despite its notoriety for its decrepit conditions.

While District Attorney Larry Krasner has made significant progress in his mandate to challenge mass incarceration, our coalition recognizes there are other political actors who hold the power to divest from prisons and invest in people. In the upcoming months, the School District of Philadelphia, the Philadelphia Police and Prison Departments, and the First Judicial District will be presenting their fiscal year budgets to City Council for approval. On May 1st, both the Police and Prison Department will be presenting their budgets. We need Philadelphia City Council to support a "People's Budget" and use these hearings to advocate for increased funding for our public school system and decreased spending on incarceration.